In recognition of the centenary of the end of the First World War two special Remembrance Services were held in the Church; which was tastefully decorated with over 400 knitted poppies. The first service was held on Saturday evening 10 November which was a quiet reflective service with periods of silence interspersed with readings and prayers. The chancel was lit only by candles, some arranged in the form of a cross, with the centre piece being a Perspex silhouette of a soldier. The service allowed the congregation to contemplate the sorrow for all those who suffered injury and loss as well as recall today all those suffering in conflicts in our world. 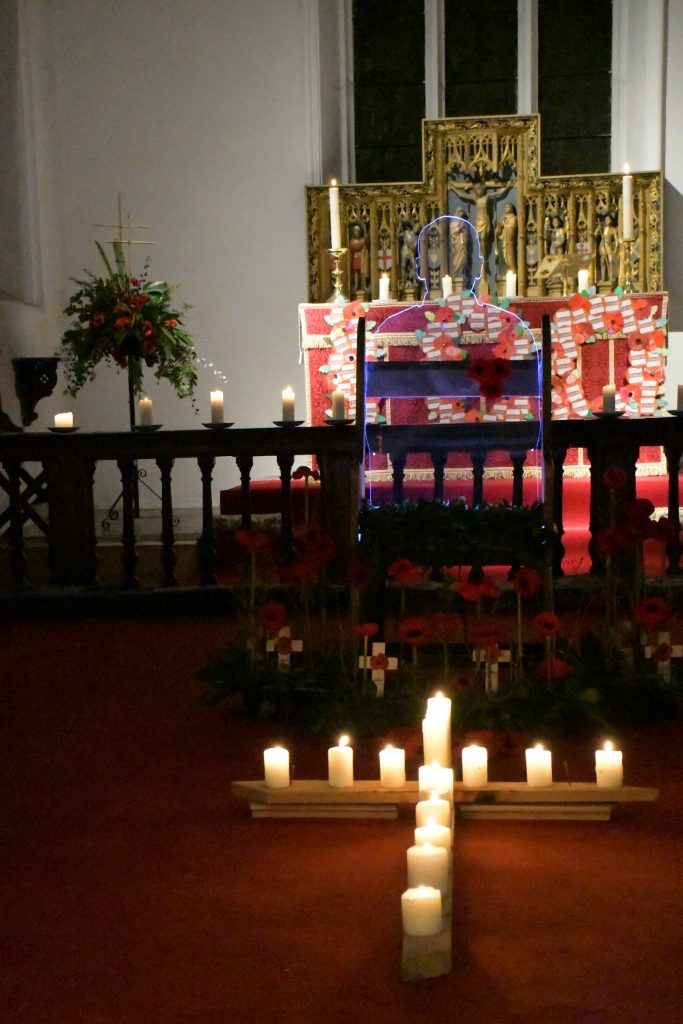 On Sunday 11 November a Remembrance Service was held, which started in the traditional manner outside the Church by the War Memorial. Rev. Dave Bell led a short service or prayers and the names of those who had died in both World Wars were read out by Simon Stranks and wreaths were laid by people representing different groups within the village. Following the 2 minutes silence, held at 11am, the service continued in the Church. This year the service focused on the very human aspects of WW1 associated with Wrest Park, first through its then owner Captain Auberon Herbert and second as its role as a hospital.  The roles of two people involved with the hospital, Private Dorman who died of his wounds and  Sister Olive Emilie Ife who nursed  him were powerfully re-enacted by Charlie Ashton and Madison Couzens who recited first person descriptions of their ordeals and suffering.    Simon Stranks then related, again in the first person, a short description of Captain Auberon Herbert’s life including his service during the war and his death.  These moving re-enactments emphasised the human sacrifice and tragedy of the war which Dave Bell developed further during his talk. This year the collection was donated by the Church equally between the Help for Heroes and British Legion.