Once again this year the Church hosted the annual  carol service for the Badger Hill scouts on Tuesday 5 December at 6pm. Rev Ian Smith led the service of carols and readings before a packed Church of over 150 children and adults. Many parents and grandparents attended  the service to join in the carols and to see the children receive their awards at the presentation ceremony at the end of the service.

Rev Ian Smith illustrated his sermon with a chocolate orange, having found several more for the 7 volunteers that helped him. The sermon dealt with the fragmented world we inhabit he explained that despite the divisions we can all be held together by our humanity (the wrapper of the orange) even when broken (when the orange is dropped). At this point Rev Ian Smith dropped his orange and it stayed in tact. 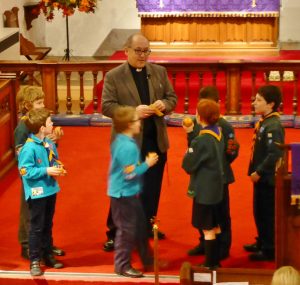 This proved a challenge for the 7 volunteers many of whom chose to throw(!) their orange onto the stone floor and not surprising chocolate sprayed everywhere! This caused much laughter and the reward was that many of the congregation got to sample chocolate orange. Many stayed after the service to enjoy tea, coffee mince pies and to catch with old friends