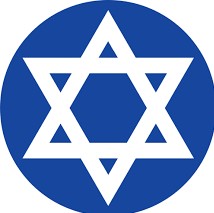 Services are held on the Sabbath which starts at sunset on Friday and finishes on Saturday one hour after sunset. The services follow a strict repetitive format except that each week a different text is read from the Torah; the first 5 books of Moses. This is the same format for all synagogues wherever they are in the world. Part of the service includes prayers for the Queen, for Israel and for the community; very similar to the basis of our intercessions.No images or idols are used in the service Brian removed one of the 4 Torahs from the Ark (aron kodesh) and unrolled it and placed it on the bimah where it is read. It was an amazing scroll, hand written in Hebrew on pieces of parchment stitched together and read from right to left, the writing followed via a pointer as the scroll must not be touched by hand. The Jewish new year marks the end of the readings from the Torah and the beginning of the readings again is celebrated by Simchat Torah.

Brian then went on to explain aspects of some Jewish customs including marriage, divorce and death. Couples are married by the Rabbi standing beneath a canopy of material held in place by supporters. All the responses are made by the man, the woman saying nothing. It is traditional for a man to stamp on and break a wine glass symbolising the fragility of marriage or the destruction of the temple. In divorce the man divorces the woman and to satisfy the Jewish law must give the wife a get. In some cases the man can refuse to do this and this makes divorce difficult to achieve. All Jews are buried, no cremation, within 24 hours of dying and there is a very efficient system in place throughout the country to ensure that this occurs. The only reason for delay is the need for a post-mortem. The memorial service is held, at the grave, about a year later once the grave has settled and it is safe to erect a tombstone.

The basis of Kosher was described including the rigorous approaches needed to keep meat and milk separate including storage in fridges and the use of all utensils.

The group found it a fascinating and very informative visit and all felt they had a far better understanding of Jewish services and practices.